Back to OvDC Network Resource Pools

We said that OvDC Network can have different types of Portgroups in vCenter Infrastructure environment based on OvDC Network Resource Pool type used. What does this mean?

While creating OvDC network, you need to select whether its directly connected to External network or connected through vSE. In case vSE is selected, you need to select the type of network resource pool to be used. The type of network resource pool will impact the way how vDS Portgroups operate but from vCenter Infrastructure point of view, it will be always a typical vDS Portgroup.

There are four types of network resource pools:

2. VLAN Backed: In this type, you need to define a range of VLANs in network resource pool. During OvDC Network configuration, assuming this type is selected, the next available VLAN will be selected and new Portgroup will be created in vSphere using this VLAN. This is one-to-one mapping, i.e. each OvDC Net can be mapped to one Portgroup only and vice-versa.

I would like to brief on what is vCDNI. vCDNI is new protocol developed by VMware (not standardized by IEEE/ITU)  which is used to encapsulate Ethernet frames on VMware Lab Manager (VLM) frames. VLM frames are having Ether-Type as '88de'. The header size of VLM Frames is 24-bytes, i.e. the overall frame size will be 1524 bytes.

Note: This is different than MAC-in-MAC protocol (802.1ah)

By what is the purpose of this encapsulation?

In multi-tenant cloud environment, you need to have some sort of isolation between tenants. This is originally implemented using VLANs. However, we will be limited to 4094 tenants which is the max number of VLANs.

Using this technology, the max number of tenants will be 4M (1024 IDs per VLAN) theoretically.

How is it implemented?

VMware vDS switch is having code component called PGI which is responsible for generating vCDNI IDs, calculating new MAC addresses for VLM header based on vCDNI IDs, and encapsulating Ethernet Frames in VLM Frames. When a frame reaches vDS, it will check ether-type to verify whether its normal Ethernet frame of VLM frame. In case its VLM Frame, vDS will do reverse calculation to get vCDNI ID from MAC addresses. In case vCDNI IDs are matching, vDS will forward the frame to destination VM based on original MAC, else frame is dropped. 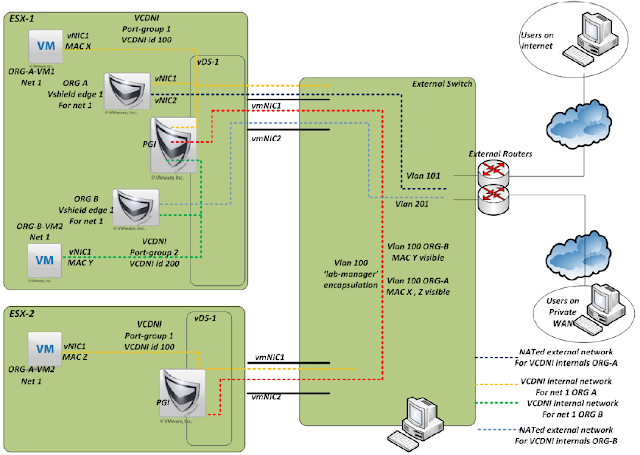 Coming back to OvDC Networks, while configuring them, assuming vCDNI Backed Pool is selected, a Portgroup will be created having the shared primary VLAN and using the next available vCDNI ID.

Disadvantages of vCDNI (Thanks to Ivan Pepelnjak for highlighting this):

While it sounds good feature, here are the challenges I saw during testing:

a. VLM frame MAC is calculate based in vCDNI ID, VLAN ID, source and destination MAC addresses. The calculation algorith isn't documented anywhere by VMware. Therefore, looking from uplink switch, there is no way to track the VM based on its MAC address. This is sometimes required for network troubleshooting when you have a faulty VM.

b. Its not at all secured when coming to broadcast and multicast traffic.

Although have separate VLAN for each tenant isn't scalable but such kind of broadcast storms is limited per VLAN, i.e. per tenant. However, with vCDNI since tenants are sharing same VLAN but different vCDNI IDs, we have 1024 tenants impacted by broadcast storm generated by one infected VM. 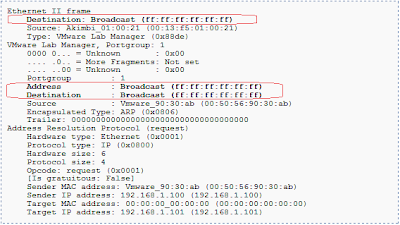 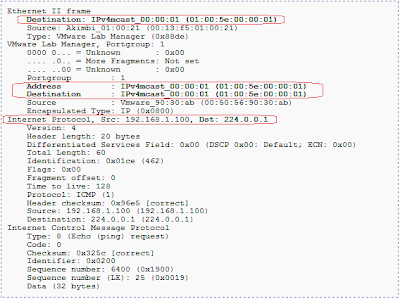 What are Isolated Networks?

We mentioned in previous post that during OvDC network & vApp network creation, you can have it directly connected to upper network or through vSE. There is a third type listed which is called Isolated Network. In this case, you will create OvDC/vApp Network which isn't connected to Upper Network. This can be sometimes useful when you create Organizations for testing and development.

From vCenter Infrastructure side, new Portgroup will be created as well as new vSE VA. However, this vSE isn't connected to any external Portgroup. 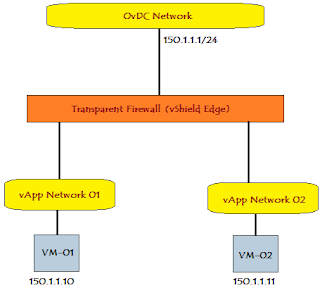 Fencing allow the usage of overlapping IP addresses for different VMs in different vApp Networks. Once vSE detects overlapping IPs, it will NAT one of them to different IP in the same pool to avoid conflict at OvDC Network level.

From vCenter Infrastructure, Portgroups will be created for each vApp Fenced Network and vSE VA will be deployed for each fenced vApp Network.